The CoreLogic S&P Case-Shiller Home Price Index does not evaluate median sales price changes, but employs its own proprietary algorithm to measure home price appreciation over time. Since its indices cover large areas – for example, the San Francisco Metro Area is comprised of 5 counties – which themselves contain communities and neighborhoods of widely varying home values, the C-S chart numbers do not refer to specific prices, but instead reflect prices as compared to those prevailing in January 2000, designated as having a value of 100. Thus a reading of 250 signifies that home prices have appreciated 150% above the price of January 2000 (with its reading of 100).

Case-Shiller divides all the house sales in the SF metro area into thirds, or tiers. Thus the third of sales with the lowest prices is the low-price tier; the third of sales with the highest sales prices is the high-price tier; and the third in between is the mid-price tier. The price ranges of these tiers changes as the market changes. The 3 tiers experienced dramatically different bubbles, crashes and recoveries over the past 18 years, to a large degree determined by how badly the tier was affected by the subprime financing crisis. The low price tier was worst affected – huge bubble, huge crash, most dramatic recovery – and the high-price least affected (but still deeply affected).

Most of the house sales in expensive counties such as San Francisco, Marin and San Mateo, as well as affluent communities in other Bay Area counties are in the “high price tier”, and that is where we focus most of our attention. In fact, much of the house market in San Francisco and other very expensive markets would qualify for an “ultra-highprice tier,” but C-S does not break that out. All counties, to some degree, have sales in all 3 price tiers.

The Index is published 2 months after each month delineated – the October index was released in late December – and reflects a 3-month rolling average, so in effect, it is looking into a rear-view mirror at the market 3 to 5 months ago.

The 5 counties in our Case-Shiller Metro Statistical Area are San Francisco, Marin, San Mateo, Alameda and Contra Costa: Alameda and Contra Costa are by far the largest markets; SF itself comprises only about 7% of house sales in the metro area. We believe the Index generally applies to the other Bay Area counties as well. There are many dozens, if not hundreds, of unique real estate markets found in such a broad region, with different dynamics, moving at varying speeds, sometimes even moving in different directions. How the C-S Index applies to any particular property is impossible to say without a specific comparative market analysis. 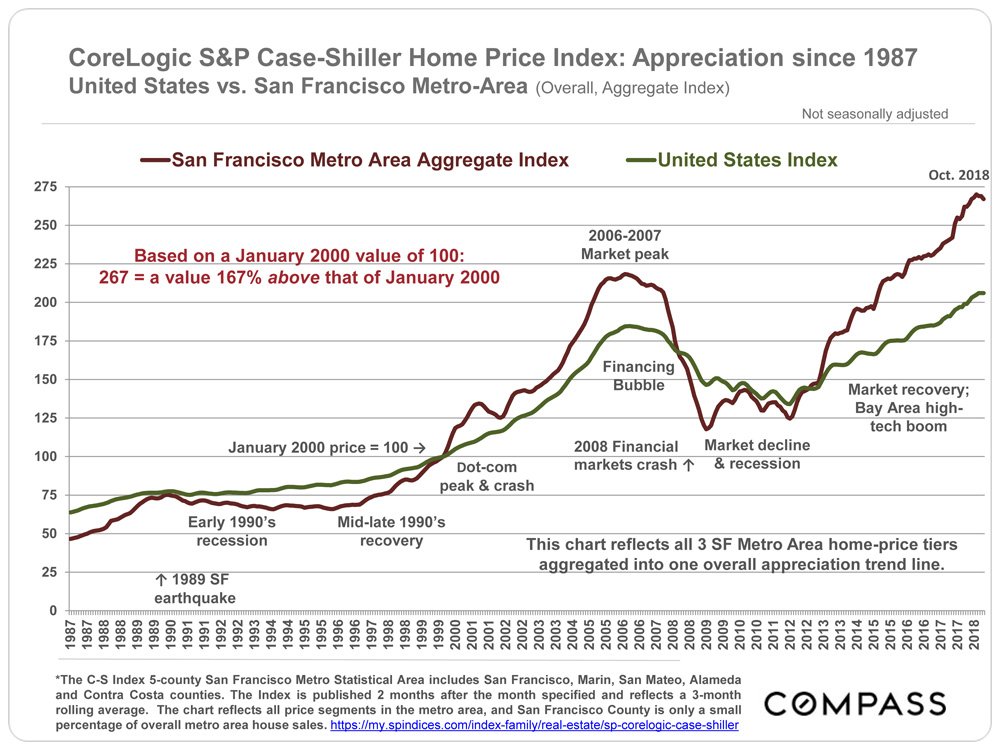 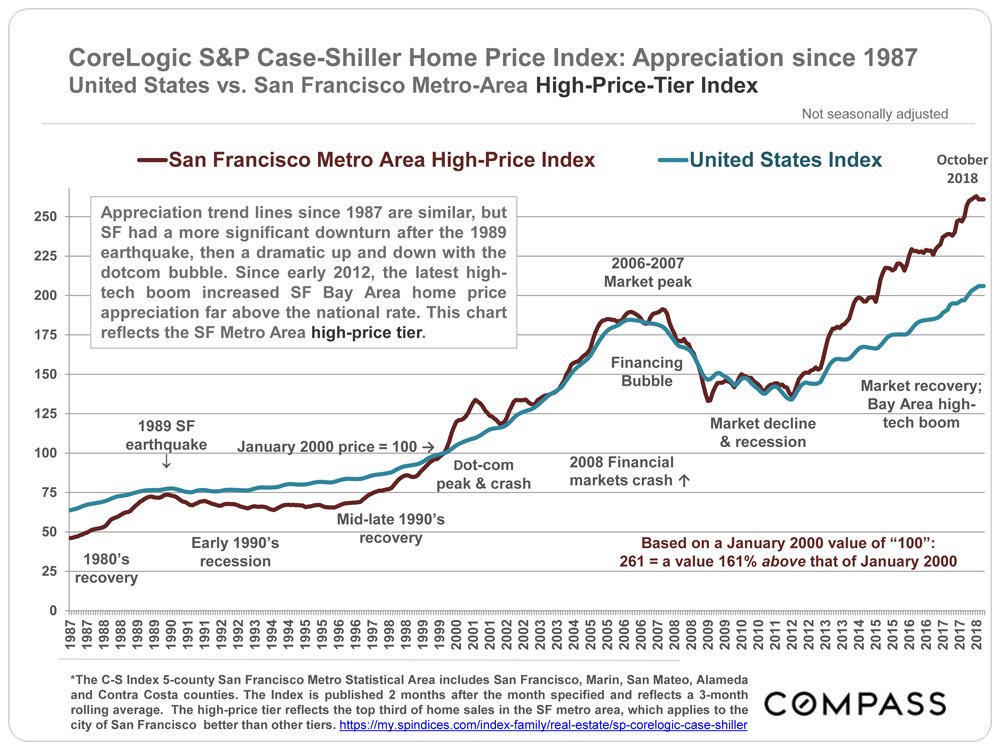 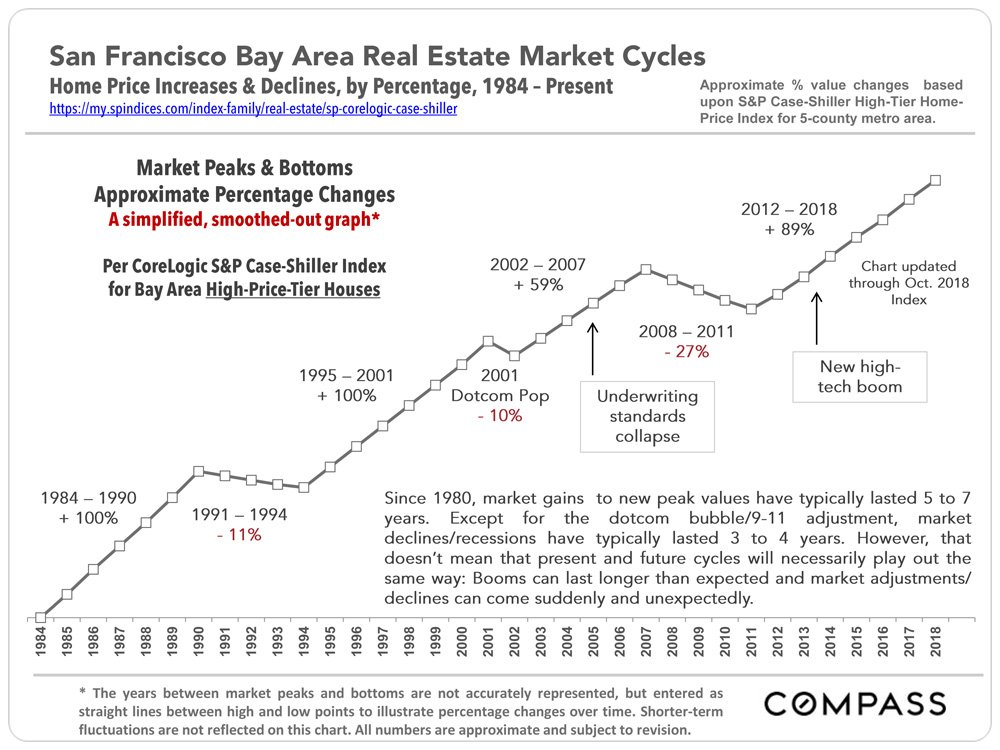 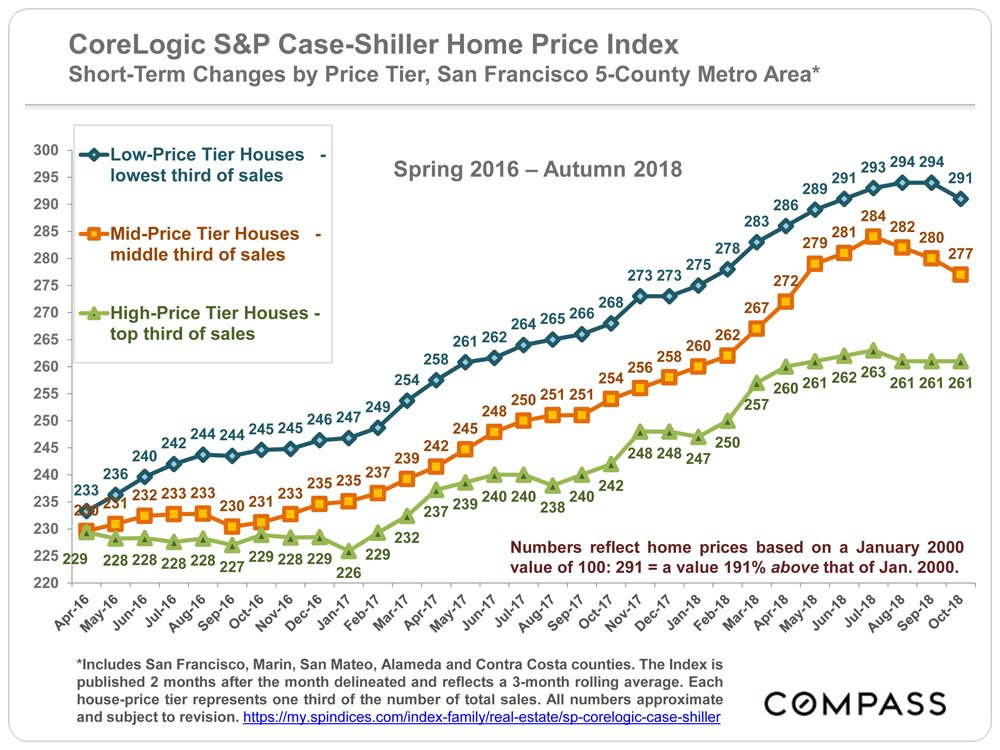 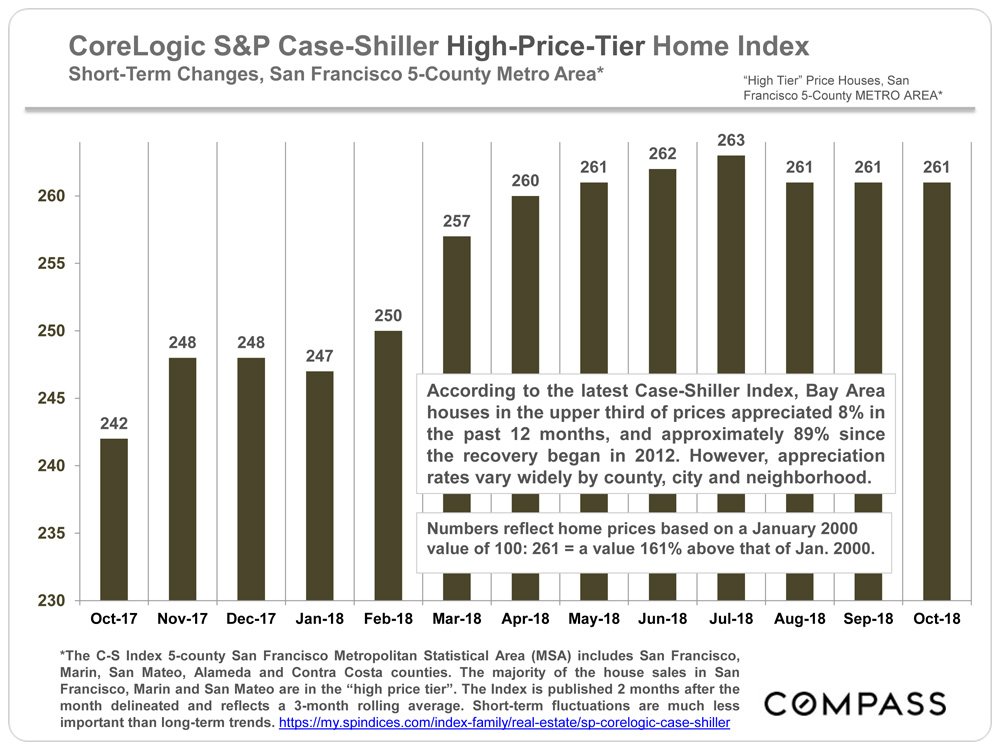 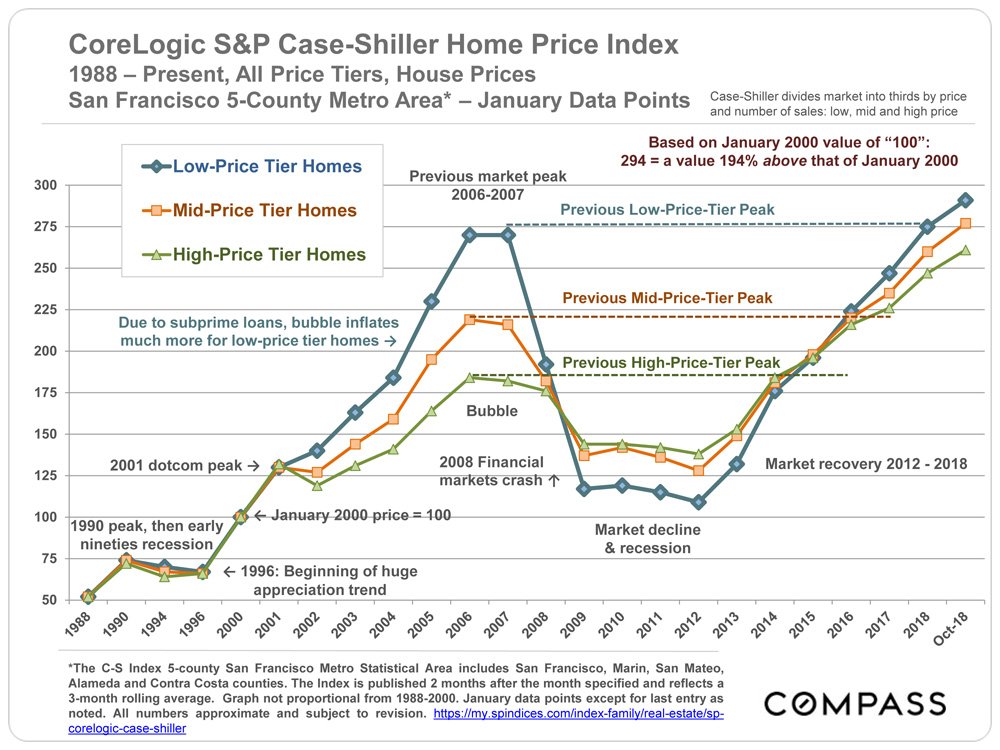 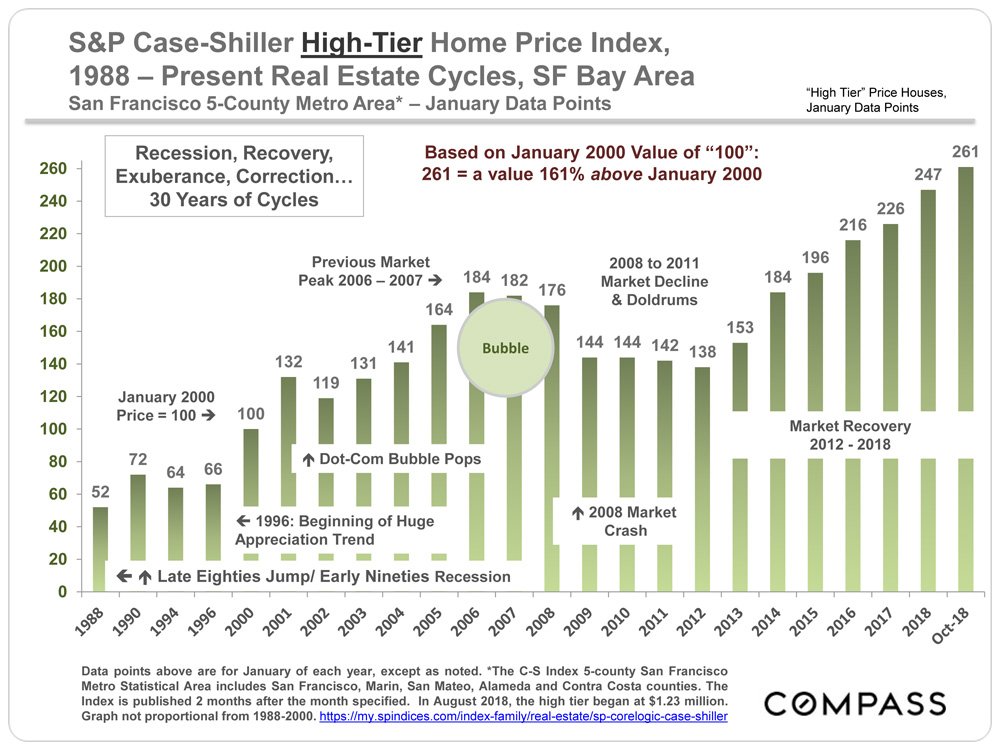 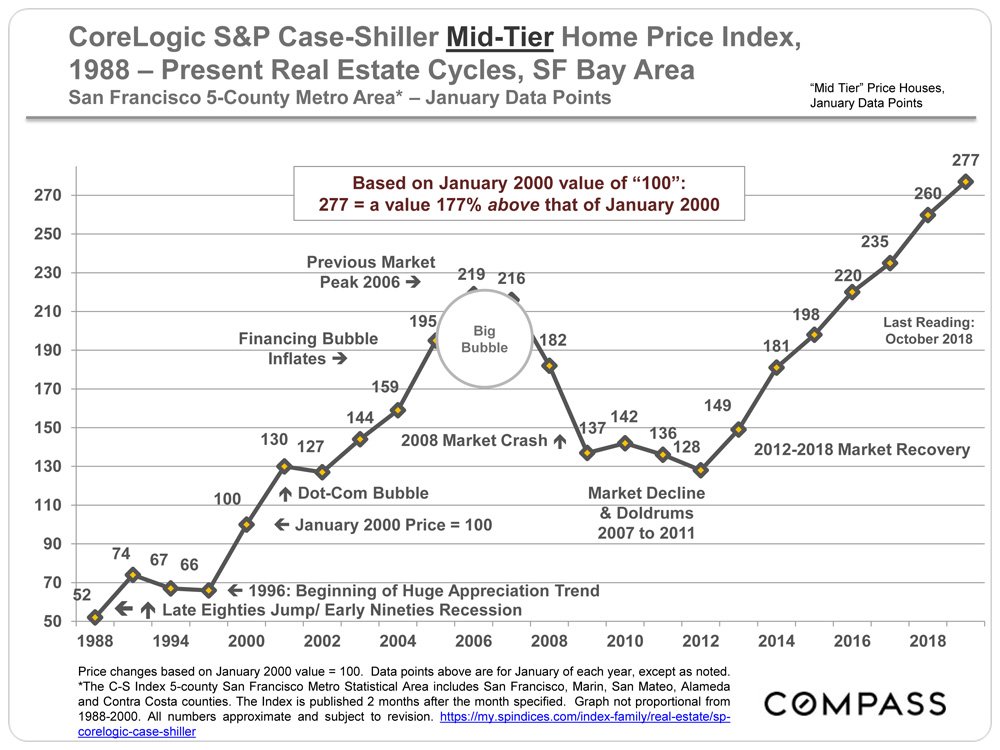 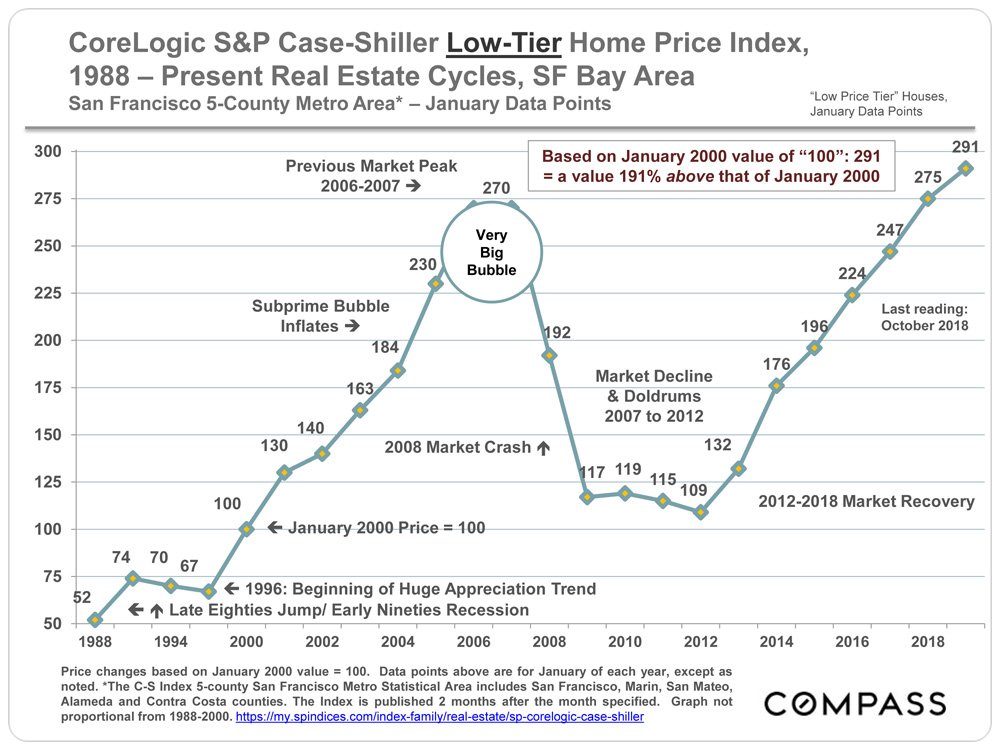